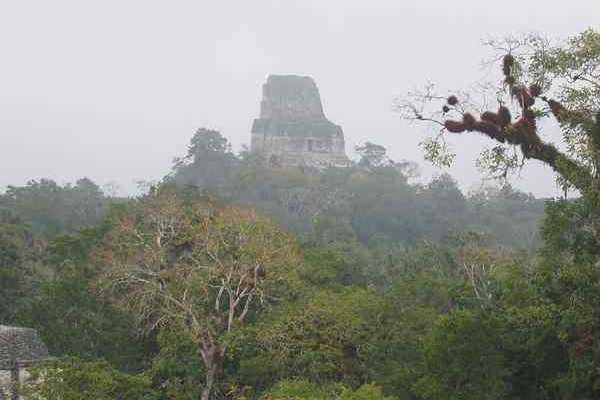 Enjoy of Tikal in a great way, guided tour through virgin jungle paths, visiting the major archaeological Mayan buildings, some of them can be climbed as the tallest Mayan construction: Temple of the Double-Headed Serpent, with 212 feet high. Tikal is cultural and natural UNESCO site. Tikal National Park encompasses 576 square kilometers of jungle and thousands of ruined structures. Tikal grew into an important ceremonial, cultural, and commercial centre over the centuries. Most of the city’s huge temples were constructed during the eighth century AD when Tikal became the greatest city in the Maya world with a population of perhaps 120,000. The Museum of the University of Pennsylvania, the Guatemalan Institute of Anthropology and History restored Tikal’s structures during the 1950s and 1960s. More recently the cooperation of Spain has donated resources to restore some other structures. Today Tikal is to Guatemala what the Great Pyramids are to Egypt, a national symbol and a source of pride in the past. The Temple of the Grand Jaguar (Temple I) and the Temple of the Masks (Temple II) loom like a pair of colossal bookends of opposite sides of the Great Plaza, a vast expanse ringed by terraces, palaces and ball courts. Temple I rises some 50 meters above the plaza’s eastern end. A stone stairway leads up the pyramids’ nine tiers, corresponding to the nine levels of the Mayan underworld.   CONDITIONS To be able to walk at least 4 miles in Tikal   STARTS The activity begins when you show up to the staff of TAG Airlines at La Aurora Airport in Guatemala City at 05:00 a.m. with your passport. Our guide will wait for you at the Mundo Maya Airport in Flores with a sign of your name at 07:00 a.m.   ENDS The walking tour ends in Tikal at 2:00 p.m. Our guide drops you off at Mundo Maya Airport in Flores at 5:15 p.m. The activity ends at 7:15 PM when your flight arrives at La Aurora Airport in Guatemala City   THINGS TO BRING Best walking shoes Rain coat Bottle of water Best clothing for warm weather   INCLUSIONS Air ticket Guatemala City / Flores / Guatemala City Professional tour guide in Tikal Transfer with air conditioning round trip Mundo Maya Airport / Tikal/ Mundo Maya Airport   EXCLUSIONS Entry fee to the park Lunch Airport tax of Q20 per person each time you use an airport Personal expenses   ADDITIONAL INFO Entrance tickets to the park for foreigners cost 150 GTQ (about $ 21 USD) Tickets are only paid in cash quetzals Children under 12 can enter the park for free. Admission to the Tikal museums costs 30 GTQ, one ticket is valid for the two museums in the park and you must buy it at the entrance to the park There are several lunch options, prices range from $ 8 to $ 15 USD per person.   Notes: *) Bring plenty of bottled drinking water and sunscreen. The Peten has a tropical climate similar to that of Mexico's Yucatan Peninsula.  **) There are also no ATM’s in Tikal so make sure to bring enough cash with you.